Proof of concept, and documentation of the process behind an interactive installation system created for Visual Literacy for Digital Media during part of a Bachelor of Design (Digital Media) at RMIT Saigon South, Vietnam, and some interactions with it [2016].

The title Ghost Writer was inspired by the incredible animal that made it all possible, the ‘black ghost knifefish’. This species of fish uses electrolocation, and is able to swim in multiple directions using the undulating fin that extends the length of its belly. The title Ghost Writer can also refer to the taking of credit for the work/ideas/talents/writing of other people (and/or animals).

Choosing the theme ‘time and movement’, this installation aimed to give a nod to performative practices like music and dance. Visually, the fish’s movements resemble those of a black inked brush performing calligraphy. Because of this, and the writing traditions of the local community where the work was installed (among other Oriental calligraphy styles), a portrait-style tank was chosen to mimic a piece of paper.

The audiovisual software component, Max for Live, enabled audio amplitude captured by the microphone to trigger visual delay effects upon the real-time webcam feed of the fish tank, displayed on the laptop screen (in the absence of a video projector). This created a system whereby the vocal sounds of the participant could be interpreted as ‘brushstrokes’ based on the position and movements of the fish. Therefore, the user could ‘perform’ the ‘darkness’ and duration of the fish’s brushstrokes, but the rest of the control lay with the fish. It sometimes became somewhat of a dance between the interspecies individuals.

With limited coding skill, I was unfortunately unable to facilitate the successive creation of separate brushstrokes. However, ideally with this system, the user could create one ‘character/letter/painting’ then ‘lift the brush’ for a while before placing it down again, adding a second brushstroke (and so on). This would also necessitate a tool for ‘cleaning the slate’ or the ability to select from past brushstrokes.

The controlled feedback-like sound effects were created in Ableton, designed to give the sense of being within a glass tank. An unintended side-effect was that the best visual results were achieved by creating long sounds with the voice, which required large lung capacity, and often left participants gasping as if they had just been underwater. 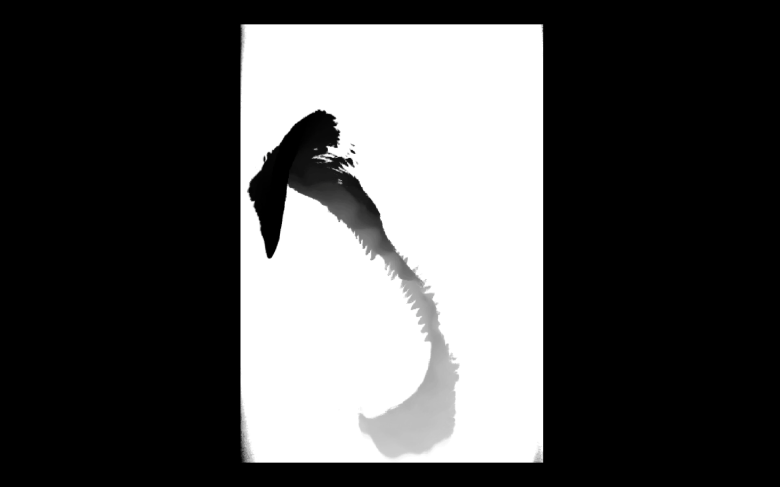